Artist Sean Guerra shares their story of healing through art. 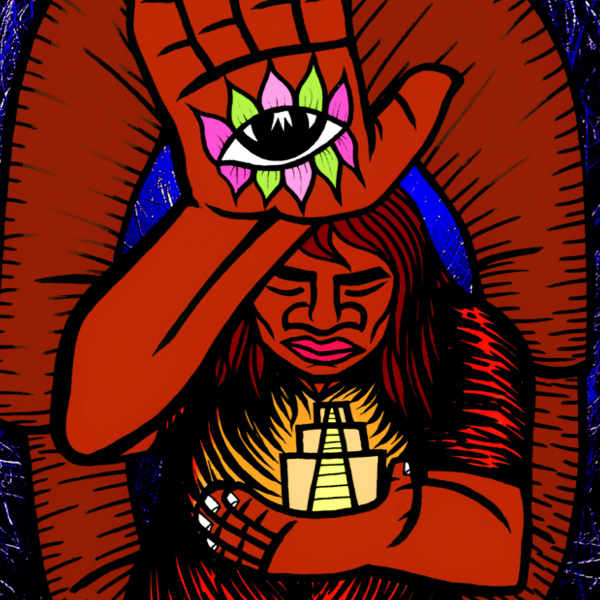 Seeing Guiding Temples, by Sean Guerra. Courtesy of the author.

ART ALWAYS SEEMED like something I was running away from. I thought it was either too personal, unsustainable—or a dream or fantasy that was too privileged for a person like me to study. However, it was art that always centered me, from the time that I was in elementary school and growing up in an unstable working-class household in California’s Central Valley. Although I did not study art formally, I received an early introduction to Rasquachismo, the “underdog aesthetic,” from a pivotal elementary school teacher and artist by the name of Jorge Guillen, who always pushed me to delve deeper in my drawings and experiment more with new media for self-expression.

My passion for art remained dormant after I graduated from college, as I felt I needed to make a living in order to support these dreams and aspirations. My work led me back to the classroom, where I felt I could support the underdog, but I still felt that I was neglecting a part of myself—that is, until I recovered a book on pre-Columbian Mesoamerican codices that started me on a path of integrating and privileging a Mesoamerican-centric perspective over a Eurocentric one.

It was not until we were all forced to be “at home” with ourselves during the COVID-19 pandemic that I really began to reflect on my life—the missed opportunities, the potential of so many divergent pathways I “could have” gone or “should have” taken—and was moved to accept art as a healing journey. I didn’t know that confronting myself through visual language would be so painful; I had to carve away what I did not want to bring into the world anymore: the emotional baggage, the negative self-talk, the deficit-thinking mentality I had inherited from an oppressive and colonized history and society, as well as my own traumatic upbringing and Adverse Childhood Experiences (ACEs).

Although I had been trying to focus on Social Emotional Learning and incorporate a Culturally Relevant Praxis through my work in the classroom, I had a lot of healing to do my own as an individual before I could ever attempt to implement them in the spaces I found myself.

This is why the attitude and artistic perspective of Rasquachismo were so vital for me to make peace with: they rooted me in the mindset of privileging los de abajo and making the most out of the least. I realized I was not meant to have a rich material life because I do not accept the exploitation of Racial Capitalism. I realized I was not meant to always feel “at home” on stolen land. The final revelatory question I now have to pose to myself is this: Am I excavating or am I settling? Because settling is for settlers, and excavation requires an examination, an unsettling; but in the end it’s a recovery process to unearth the temples that were buried underneath, just as a pre-Columbian and liberated Mesoamerica exists underneath the pavement and cement we now stand upon.

I began all of these pieces in this collection in December of 2020 as a personal and emotional reflection of the year. The reflection turned into revelations—sketching, inking, then digitizing each as they came about.

I felt a heavy weight, but also the levity of letting go the cargas that were not meant for me to hold any longer. At the same time, I heard about relatives and close friends losing loved ones dear to them. Having lost two cousins in the past three years, I could empathize with the grief from the loss of a family member and wanted to give the intention of a soulful prayer for our collective journey of healing.

I felt lost but still connected, searching for guidance. On a jog, I looked up and saw sprawling branches illuminated by a street lamp. It felt as if even though the world around me was falling apart, staying in tune with the senses and looking within for guidance and ancestral wisdom could lead me out of the darkness.

This piece came about after looking in the mirror, accepting the mistakes I had made, and throwing my past selves through the portal in the hopes that I could shift and leave the baggage behind by cultivating self-acceptance.

I had also learned about the mythical land of “Fusang,” which some people believe is an ancient Asian depiction of Mesoamerica, with references to the maguey plant. It helped me embrace nuanced perspectives of pre-Columbian Mesoamerica, shedding the tired tropes of Aztlán and European “discovery,” for in truth it is possible that tri-continental migration and cross-cultural solidarity were already happening before European colonizers came. My introduction to Mesoamerica was by way of the Mixtec Codex Zouche-Nuttall, which documents the history and royal genealogies of the pueblo de la lluvia, so I was also accepting the path of reading symbols and following the rain god, Dzahui.

THIS IS MESOAMERICA: JAGUARS IN THE SKY

This piece was inspired by a 2017 article called “The Roar of the Rain: A Late Preclassic Jaguar Pedestal Sculpture from Southern Mesoamerica,” by Andrew D. Turner, which draws the connection between Mesoamerican rain gods and jaguars.

Turner states, “The Olmecs, who produced the earliest monumental artwork in Mesoamerica, associated the jaguar with rain and, by extension, agricultural fertility. The famed artist and scholar Miguel Covarrubias first noted that the Olmec rain god, which was the precursor to the major rain deities of ancient Mesoamerica—Chahk of the Maya, Cocijo of the Zapotecs, [Dzahui of the Mixtecs], and Tlaloc of Central Mexico—was based on a jaguar prototype.”

Since I had been aligning myself with the Mixtec codices following Dzahui, I found this to be a revelation that in turn helped me to flip the Eurocentric history of settler colonialism on its head and offer a liberated pre-Columbian Mesoamerica, symbolized by the maguey plant, in its place.

BRIDGES ARE TEMPLES: WE ARE THE SKY

This piece was inspired by a print by Leopoldo Méndez of the Taller de Gráfica Popular titled “León de La Barra, the White President” (1947), in which Zapata soldiers are in the clouds pointing their rifles and bayonets downwards like lightning bolts upon the bourgeoisie.

The symbolism and title was also inspired by the revelatory writings of “third world women of color” in This Bridge Called My Back (1981), along with the moment and movement of artistic solidarity shown between the Black Panther Party and the Zapatistas of Chiapas as described in Zapantera Negra (2017), and the mural entitled “Women Hold Up Half the Sky” in Chicano Park, San Diego. Rain has been associated with jaguars and feminine energy since the first Mesoamerican civilization of the Olmecs, and African and Indigenous resistance has been at the forefront of social justice movements. 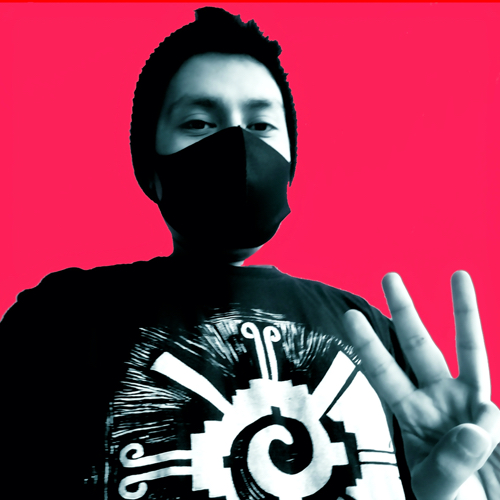 SEAN GUERRA (Chicanx) is a visual artist and paraeducator from the Central Valley living in Northern California. Since graduating with a BA in Chicanx Studies, they have sought to support empowering and creative spaces in the classroom. Art serves as a personal and healing process for them in recovering a spiritual connection to antepasados through a culturally relevant praxis inspired by Rasquachismo. 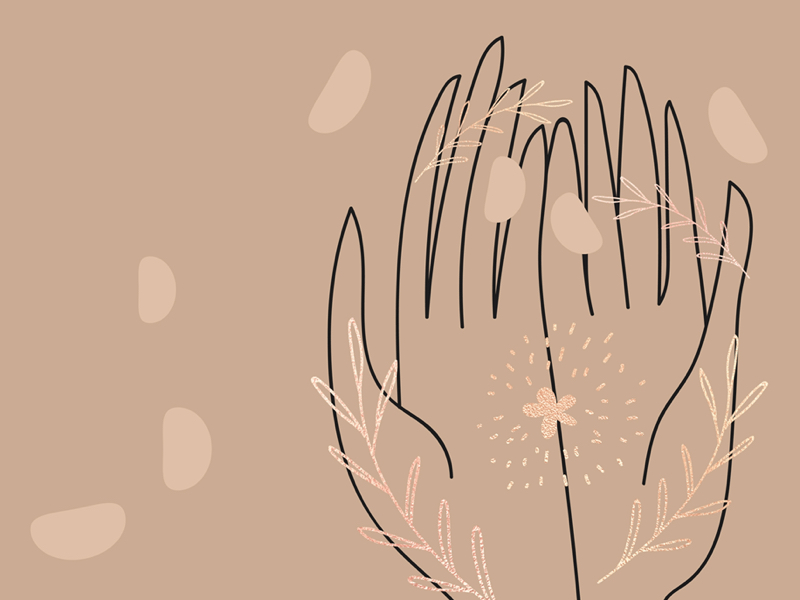 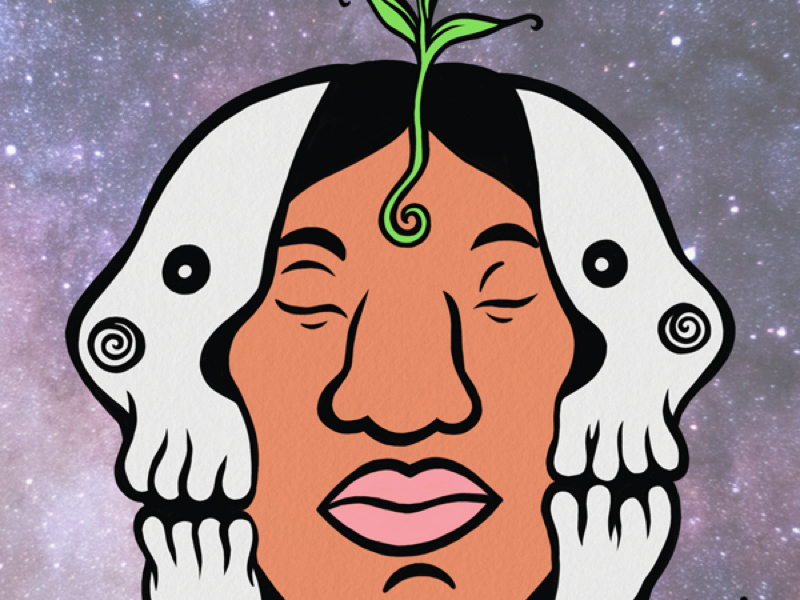 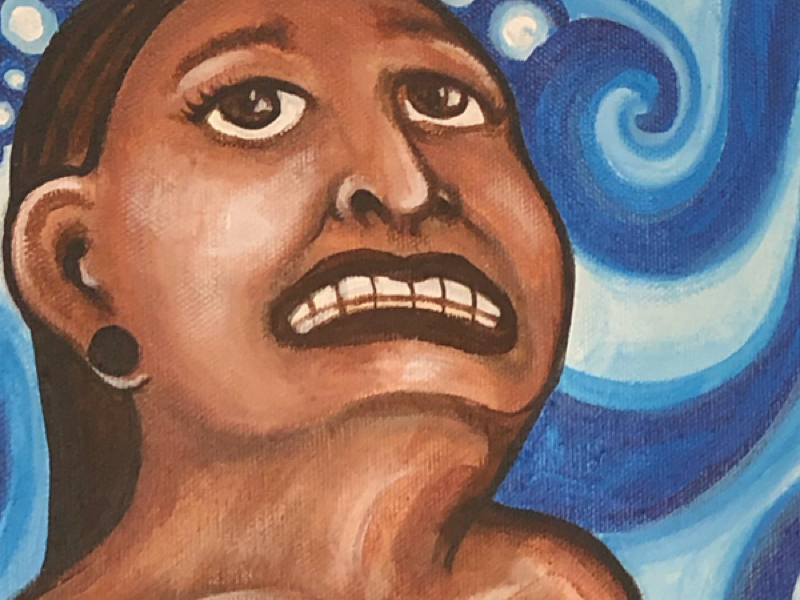 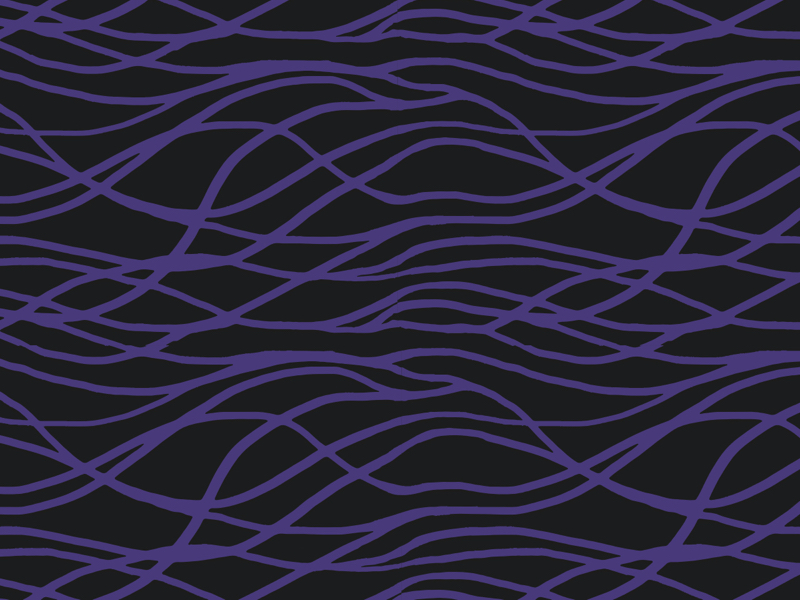 An Interview on Voices from the Ancestors